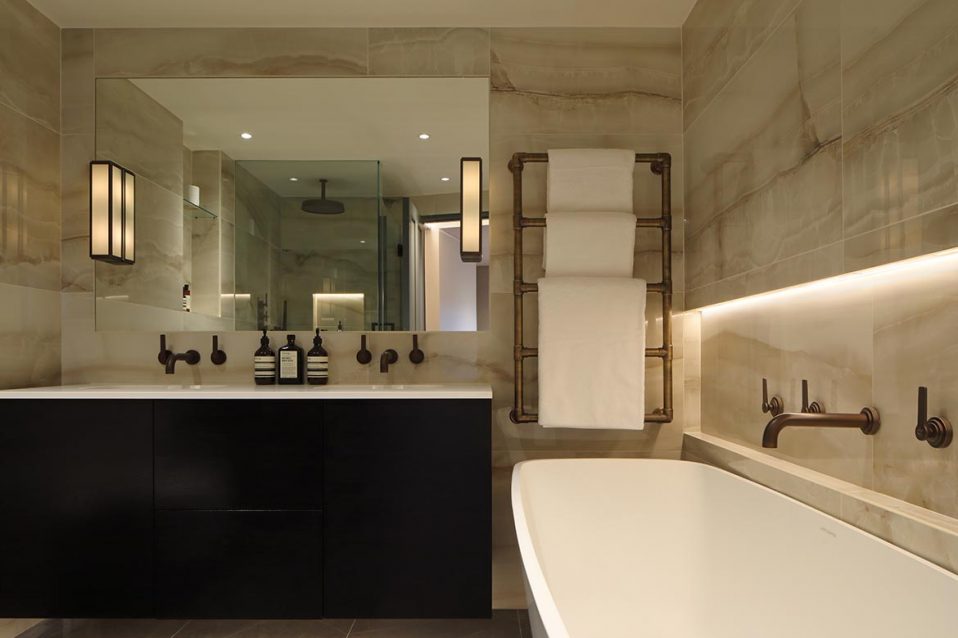 By working as a team, interior designer Elnaz Namaki and developer Hugo van Bilderbeek have transformed a dark apartment in Chelsea into a desirable penthouse

Interior Designer Elnaz Namaki faced a dilemma when she was appointed to reimagine a Chelsea penthouse. How to introduce light into an apartment that felt dark and dated despite a wraparound terrace? The solution was to change the location of some rooms and open up key doorways.

“The client had lived in the apartment for 10 years,” says Namaki. “The decoration was tired and the apartment felt dark and poky. The client was quite young when she first moved in and hadn’t developed her own taste or how she wanted to live. A home should represent your character and it wasn’t doing that. I spent a lot of time with the client, trying to get in her head – you have a few meetings like that and then you’re off. The client was abroad for much of the process, but she trusted us. There wasn’t that backwards and forwards which consumes so much time.”

One of the client’s few requests was for a walk-in dressing room where she could see all her clothes. To accommodate this, Namaki swapped the guest bedroom with the master suite and repositioned a cloakroom across the hall. She also cheated some space from what had been the kitchen to open up what she needed for a master bedroom with a dressing area fitted with floor-to-ceiling storage behind black glass doors and an ensuite. She managed to accommodate a bath and shower, at the client’s request, plus twin basins and storage. The marble-effect porcelain tiles have a rich brown vein, which works perfectly with the bronze taps, shower fittings and towel radiator. “I always use bronze if I can,” Namaki says. “It is like my signature. Chrome and stainless steel are cold; gold feels too opulent to me, whereas bronze is warm and has that old/new feeling.”

The client wanted the overall scheme to be neutral. “She wasn’t keen on colour. It was something we had to overcome – she had made some bad choices in the past (the hall was painted deep purple) and now she only wanted grey,” says Namaki. “A lot of people are scared to make mistakes. They go neutral because they are scared of colour. But the more you use it, the more you realise how enriching colour can be.” To win her client over, Namaki chose Farrow & Ball’s Elephant’s Breath for the walls, then added splashes of colour such as the cerise bedspread in the master bedroom, yellow and navy soft furnishings in the guest bed and a navy velvet sofa plus bold art in the living room. Art within the penthouse includes pieces by Banksy, Anish Kapoor and Kadar Brock.

However, Namaki says, “the easy part of design is the soft furnishings. To get to that feeling of quality and cohesiveness is in organising the services – that takes a lot of thought. It is not pretty, but it is so important. If you don’t have that flow, with all the services hidden, whatever rug you put down or whatever sofa you choose won’t feel the same.“

This is the third project Namaki has worked on in partnership with Hugo van Bilderbeek of HvB Development. This productive relationship allows Namaki to have a vision which is then realised by Bilderbeek and his team. In Chelsea, she aimed to connect the sociable areas of the residence and create a seamless space. Bilderbeek removed what had been a dining area and created a spacious kitchen. He also introduced tall glazed doors at the end of the long corridor, creating a handsome entrance to the 4.5m-high living space.

The kitchen is from Espresso in Chelsea Harbour, although Namaki personally chose the stone for the worktops. “We have our own stone supplier. I always like to go and pick the slabs from the yard – I never let the kitchen supplier choose the stone,” she says. It now opens directly onto the living area, with both rooms benefitting from natural light from the floor-to-ceiling windows. An unused gas fire was repaired and the chimney breast clad in stone, as the client had mentioned she liked the ski chalet look. To further enhance this feature, bespoke shelving was made to Namaki’s design and fitted each side. She says: “I waited for the chimney to be finished before I designed the shelves. It was hard to make something work visually, but now it has a nice symmetry to it.”

Wherever possible, storage was included. “I think some designers don’t think about it or choose to ignore it,” Namaki explains. “I always think of how I would live in the space – where would I keep the ironing board, where would I hang my clothes or keep my suitcase.” Behind the door to the master bedroom is a deep wardrobe that was cut out to create storage. A coat cupboard was added in the hall, as well as space to conceal the washing machine and dryer. “In open-plan living it is even more important to make sure you have the storage for those things because, at the end of the day, it is a home,” the designer says. “It needs to look beautiful, but it has to be functional – and if everything is open, then where do you put things that you don’t want on show? If you haven’t thought of that from the beginning, then it just ruins it.”

Although it was possible to significantly alter the layout of the penthouse, there were some restrictions Namaki and Bilderbeek were not able to overcome. “Unfortunately, we were not allowed to touch the windows – which is a shame, as they are white plastic,” Namaki says. “I would have liked to replace them with hardwood French-style windows. We even had to keep the handles, but I did have these dipped in bronze so that they matched the scheme.” A fine attention to detail that has resulted in the client being delighted with her new apartment.