This apartment is a masterclass in layout and luxe 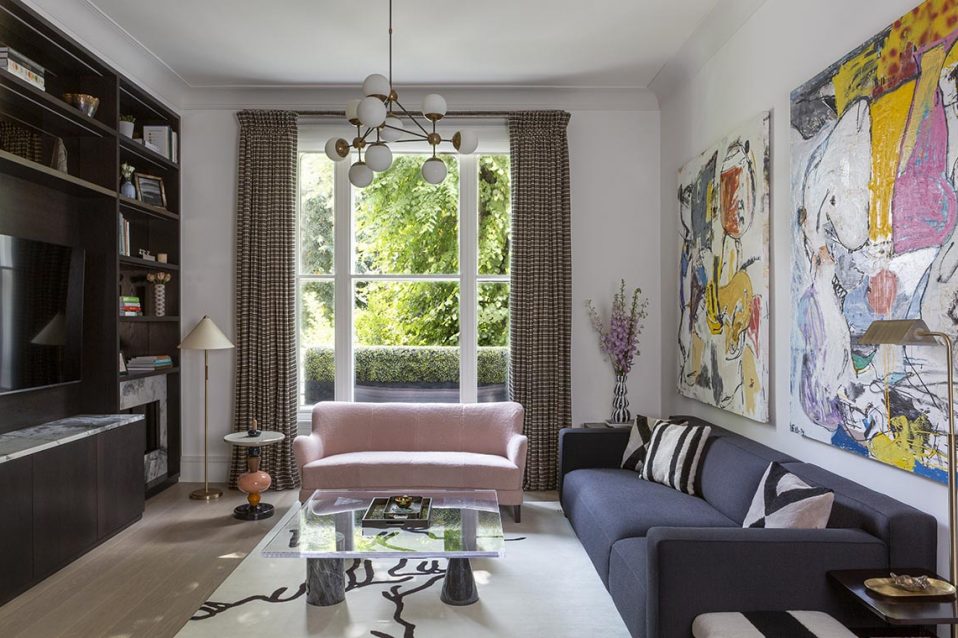 Coming home re-energises me,’ says interior designer Elnaz Namaki, whose stucco-fronted Victorian apartment on a quiet west London street exudes a sense of graceful serenity. ‘At the end of a night out, I often joke that I’m retreating to my charging station, much like an electric car,’ she says.

Elnaz was initially drawn to this property for its lofty proportions and view of the lush gardens at the rear. She could see that the well-worn one-bed interior had the scope to be transformed into a two-bedroom, two-bathroom home. ‘It was a question of tweaking the layout,’ she says, ‘though those tweaks involved significant restructuring.’

After turning to business partner Hugo van Bilderbeek of HvB Development to check that her plans were feasible (‘I always like his nod of approval on projects like this’), Elnaz embarked on a detailed six-month renovation.

The galley kitchen was knocked through to the adjoining sitting room; the master bathroom borrowed space from the bedroom for a roomier feel; a wall was removed from an awkward L-shaped nook to create a guest bedroom-study; and a shower room was turned into a glamorous cloakroom.

The master bedroom scheme, which takes its cue from her trip to Vietnam, features trunk-like joinery with elements of raffia, rattan and dark wood.

All of these spaces lead off from a square entrance hall, which initiates a natural sense of flow. ‘I wanted this area to make an impact. I played on the idea of a traditional panelled hallway, but with shadow gap detailing instead of beading and a painted tin ceiling. It’s very New York loft-meets-English style,’ Elnaz says.

Lighting that she designed in conjunction with Art et Floritude provides graphic silhouettes, while a striped shearling bench adds a playful yet practical note.

Hard-working joinery is a feature throughout. In the sitting room, Elnaz designed a full-height piece built around an off-centre flue that could not be moved, and added a marble inset to turn it into a gas fireplace. This is mirrored in a marble-lined concealed drinks cabinet to create a sense of symmetry.

‘Storage was essential for a streamlined look, so I designed a generous wall-to-wall unit in dark stained oak to house accessories and media,’ says Elnaz. ‘I made sure the cornicing wraps around the joinery for a seamless finish.’

Mid-century shapes and standout lighting and artwork define this area.

In both bathrooms, old-school luxury abounds. Elnaz chose Arabescato Corchia for the flooring and bath surround in the master en suite: ‘It’s my dream marble because of its blue-toned veining,’ she says of its luxurious feel.

By the bath, a lit inset shelf makes the most of this compact space.

Elnaz designed a room that could accommodate guests and double up as a study. The walls and ceiling are finished in polished plaster for a mellow, textured feel, while built-in mirrored cabinetry built around the doorway provides valuable storage.

The decor in the guest bedroom-study was inspired by a Persian rug once owned by Elnaz’s grandparents in Tehran, which is complemented by a plaster ceiling finish in a chalky blue.

These notes are picked up in the adjoining bathroom, with walls lined in a paisley print. ‘We stencilled details from the wallpaper onto the ceiling of the study to carry that feel through.’

An ornately framed original window is the centrepiece of this simply decorated space. Elnaz added tumbled Verdigris tiles for texture.

‘I wanted to have fun – compact spaces are ideal for experimenting with all-out glamour,’ says Elnaz. She chose dark, rich hues and tactile wallpaper for a cocooning feel and added a deeply veined marble floor for drama.

In a home where form and function merge so seamlessly, it’s little surprise that staying in feels like the new going out. ‘Weekends are about cooking simple meals, relaxing on the sofa and watching TV,’ Elnaz says. ‘A home is somewhere you can feel safe and inspired – and this one ticks both boxes.’